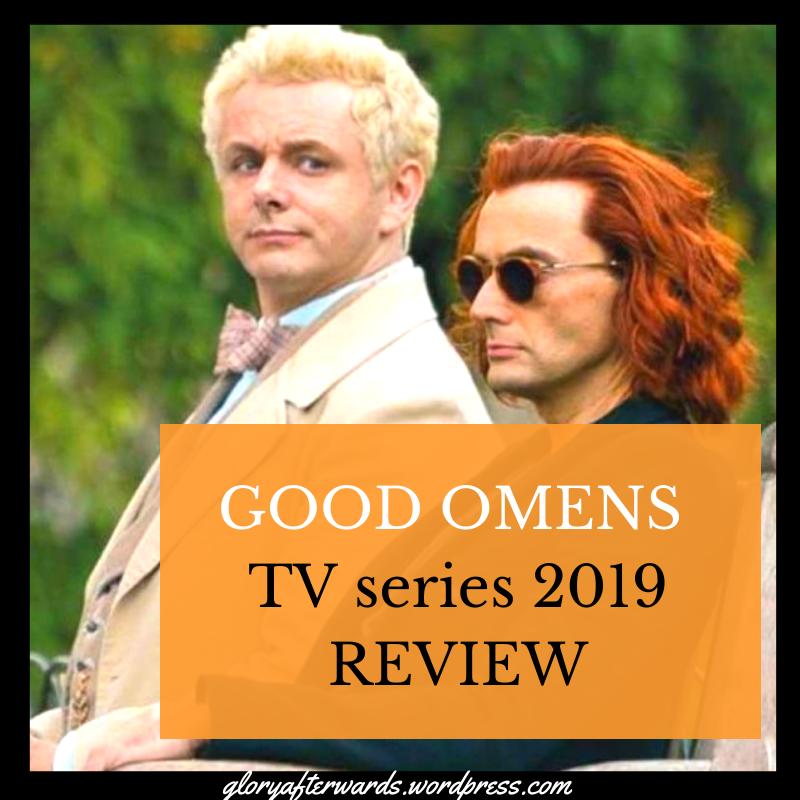 [PS: This is obviously not travel-related. Just something I thought I should post as I tie up loose ends. Incidentally (or not) I will be reading Good Omens (book) on the plane.]

What would happen if the angel guarding the gate of Eden, and the serpent who tempted Eve were flung down to earth and spent six thousand years together?

What would happen if they both discovered they rather liked humanity and the world in general?

What would happen if they became friends?

Good Omens, that’s what. Good Omens (starring Michael Sheen and David Tennant) follows an angel (Aziraphale) and demon (Crowley) pair as they attempt to avert the impending apocalypse and save the world, all while keeping their actions hidden from their respective bosses.

Joining them is an eleven year old Antichrist and his gang of precocious friends; a witch tasked with bearing a book of (true) prophecies; the klutzy descendant of a witch killer; a still-in-active-service witch-hunter; a middle-aged lady of questionable morals; the four horsemen of the apocalypse; a hell-hound named Dog; some vengeful demons; some up-tight arch-angels; and a black Bentley.

What could possibly go wrong?

VERDICT: A fun look at the end of the world through the eyes of a demon and angel pair who are intent on saving humanity. A cluttered cast, but enough chemistry and twists to make it worth watching.

I love the ‘enemies to friends’ trope. I love seeing unlikely duos overcoming their differences to fight on the same side, and even respect and like each other. It makes for good characterization and interesting plot developments, and was done really well here. David Tennant and Michael Sheen have great chemistry.

Perhaps more importantly, the angel and demon retain enough of their respective ancestry to keep the viewer unsure. The demon really is selfish and at times awful, the angel really is trying to help people and be kind – and this leads to inevitable clashes. Yet at the same time, they have each rubbed off onto each other over the millennia which adds another unexpected element to the mix. It’s hard to preempt their actions which keeps things interesting.

I really enjoy adaptations. I find conspiracy theories fascinating. I love the extra challenge of discerning what is true and what is false; what has changed and what remains the same. In this case the ‘source material’ is as old as time: the biblical story itself.

Is it an accurate retelling? Of course not! The facts of the biblical account are shamelessly altered to fit the story. I think this can enable those who know the original account to look at it through new lenses, which is always helpful. I also think it can be very harmful when people take Good Omens at face value, assuming it to be a correct representation. But then again, that sort of un-discerning consumption is always unhelpful.

Of the top of my head, alterations (from evangelical canon) include: 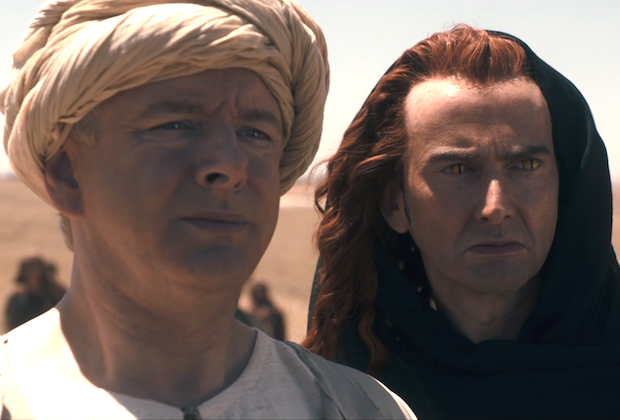 [Aziraphale and Crowley watching the crucifixion]

I think Good Omens played it a bit safe. I understand why – political correctness; not wanting to alienate a section of the audience; plot purposes. But it could have been so much more!

We see this in a fascinating conversation about whether “The Great Plan” (which all the heavenly and hellish principalities know) and the “Ineffable Plan” (which only God knows) are actually the same, and whether all these beings are actually working for God or just themselves.

Unfortunately this helpful critique is smashed to the ground by the heavy-handed exchange that follows:

Gabriel: God does not play games with the universe.

Crowley: Where have you been?

Ultimately Good Omens uses some biblical motifs but that’s it. It’s not a sustained critique, or even a satire or parody. Which is fine… but it lingers on the border between the two camps long enough that this feels disappointing.

Still, one point I find particularly interesting is that Tracey has to “give up” being a “fallen woman” in order to get her redemption. Which seems a bit more aligned with orthodoxy than the series’ affirmation that “being human” is better than being good or evil.

The relationship between Aziraphale and Crowley lies at the heart of Good Omens, to the extent that when they are not on screen, the plot drags. There are too many characters, they often come across as a bit caricatured, and everyone knows the world isn’t really going to end.

The final episode taps into this when it resolves the “end of the world” plot halfway through, and then spends thirty minutes tidying up Aziraphale and Crowley’s future and relationship.

Unfortunately, there were some times when the plot got directly in the way of characterization.

For instance when Aziraphale calls Crowley “nice” and Crowley slams him up against a wall and begins to say “don’t call me that -” and then someone interrupts with news of the Antichrist and we move on. I think this was an opportunity to really delve into the characters, to make them defend their beliefs, to force them to confront their inner natures, and it was missed.

Ultimately, the ‘character premise’ in Good Omens is far more interesting than the ‘plot premise.’

The ending was rather cliche

The race to save the world ends with the usual affirmation about humanity. Everything human and natural is good. Higher Powers and Destiny are not. The angel and demon are at their best when they are most like the humans around them. It’s all very comforting, and it is truly is touching – but I can’t help but wonder (again) couldn’t we have done more?

Sure, my heart swells to the backdrop of “A nightingale sings in Berkeley Square” and Crowley and Aziraphale toasting each other “to the world,” but it still seems like an incredibly safe ending for a premise that appeared so high stakes.

We’ve just learned that there’s another dimension underpinning all of life, but it doesn’t really matter, does it? Pity, I could have been fooled into thinking it might.